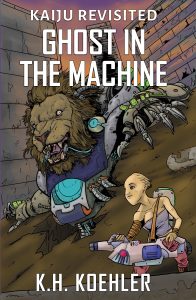 Utilizing their great cybeasts, the unstoppable Xirian army has conquered a thousand worlds in the galaxy, subjugating or destroying the inhabitants in the process. The War Master has ordered a Level 7 cybeast to be created.

The beast: Goliath. The target: Earth.

Xara is only a scientist, more at home in a lab than a battlefield. She is just barely keeping her life together when the alien attack commences and the Xirians unleash their full fury on the planet.

As she watches Goliath’s devastating initial attack, she forms a plan—a plan that might actually stop the cybeast and save the human race, but it will take a combination of courage, treason, and ingenuity to carry it out…

K.H. Koehler – K.H. Koehler is the author of various novels and novellas in the genres of horror, SF, dark fantasy, steampunk and young and new adult. She is the owner of KH Koehler Books and KH Koehler Design, which specializes in graphic design and professional copy-editing. Her books are widely available at all major online distributors and her covers have appeared on numerous books in many different genres. Her short work has appeared in various anthologies, and her novel series include The Kaiju Hunter, The Mrs. McGillicuddy Mysteries, Anti-Heroes, Planet of Dinosaurs, the Nick Englebrecht Mysteries, and The Archaeologists. Visit her website at khkoehlerbooks.wordpress.com.