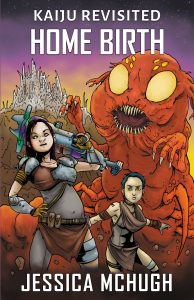 The largest and most hostile creature in the galaxy needs an heir.

Eibal has grown embryos for nearly every species in the galactic web. As a “sympathetic genetic,” she and her crew provide procreation services to infertile creatures like the gentle yaerla, the star-sea kreb, and the third most aggressive race in the galaxy, human beings.

When the queen of the darkogs makes Eibal an offer she can’t refuse, she and her partner Naka risk everything to give her an heir. But few places in the galaxy are more dangerous than the darkog kingdom of the Southern Ring, and Eibal soon finds herself entrenched in a brutal war between humans, darkogs, and her own body.

Jessica McHugh – Jessica McHugh is a novelist, poet, and internationally produced playwright running amok in the fields of horror, sci-fi, young adult, and wherever else her peculiar mind leads. She’s had nineteen books published in eight years, including her bizarro romp, The Green Kangaroos, her Post Mortem Press bestseller, Rabbits in the Garden, and her edgy YA series, The Darla Decker Diaries. More information on her published and forthcoming fiction can be found at JessicaMcHughBooks.com.