Marta Martinez has a problem 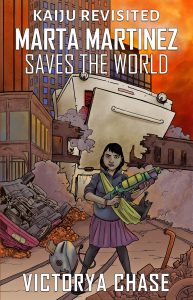 She’s an engineering student gunning to win the campus robot wars and has a raging crush on Clarence Cunningham, star quarterback. He doesn’t even know she exists, and her best friend has been less than supportive.

When major kitchen appliances suddenly grow to gargantuan size and start attacking the city, Marta sets out with her cat, her neighbor, and her engineering partner, into the skyways of St. Paul to save her best friend who just happens to be trapped at a Lowertown poetry reading with Clarence Cunningham.

Marta has a plan:
Save the quarterback
Save the world

Victorya Chase – Victorya Chase is a writer and educator living in the vast and cold urban wilds within the MidWest, having already lived on the coastal extremes of the United States. She works in Medical Education where, among other things, she teaches the importance of narrative competency and understanding the various cultural and personal stories at play in the exam room. Her writing has appeared in Cemetery Dance, Lamplight, and The Unlikely Journal of Entomology, among other places.

Her home on the web can be found at victoryachase.com