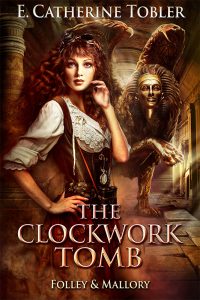 A river at the bottom of the world.

A tomb filled with death and peril.

A journey through hell itself.

At the turning of the year, Yule presents Virgil Mallory with the opportunity to gift Eleanor Folley with a journal kept by her father, a journal that leads them to a mysterious tomb near Hapshetsut’s temple in Egypt.

It is no ordinary tomb, perhaps the first ever carved in the valley, known to Napoleon and others, but never entirely plundered. Why would such treasures stand untouched? Had anyone breached its darknesses?

Together, Folley and Mallory will enter the tomb, though what they find inside will change everything they have believed of Anubis and the strange shapeshifting world they find themselves a part of.