June is our anniversary month (birthday month?) here at Apokrupha. We became official in June of 2012 after over a decade of dreaming, plotting and wanting.

We are behind in the June 2015 issue of LampLight. This is for a few reasons, but mostly, if I dare pull back the curtain some, it is because LampLight, for the most part, is a one editor operation.

This year, 2015, has seen some incredible moments for me already, and some stressful ones. A wedding, a honeymoon, new jobs, moving, all the while trying to keep a float of the submissions and stay on track with the issues. The March issue came out on time, but the June one has not.

There is still a June issue coming. For these reasons, we are behind, but I will not rush this issue just to get it out. I owe it to both the readers of LampLight and the writers who have submitted stories to put the same focus as I always would into this issue.

I ask for a little more patience from everyone.

Paul Anderson is reading for September, which will be out on time, thus re-setting us back to a normal schedule.

The June issue is coming, bringing the final part of Kelli Owen’s Wilted Lilies, a great featured writer, and more. The Volume 3 annual will follow shortly after, and September’s issue will be on time.

And this fall will have some more surprises in store.

This June we are 3 years old, here’s to many more June’s to follow. 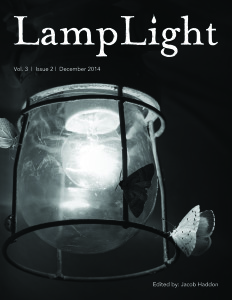 Our featured artist is Mercedes Yardley. We talk to her about her work and her art. Kelli Owen brings us part two of her serial novella, Wilted Lillies. Featuring stories by

A meteor changes a test flight of an interstellar ship into something more serious. A mother’s gift of nesting dolls brings with it more than just memories. An astronaut on the moon, out of oxygen, take a different journey. A time traveler works to find out the how of a dark future. All in this issue of LampLight.