More information about Dark Bits is coming, but we wanted to share wit you the writers who would be in Dark Bits 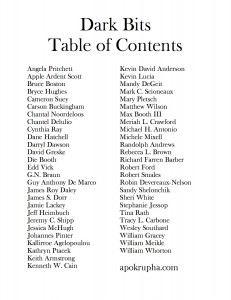 David Bernstein is also in Dark Bits, omitted by accident!

Apokrupha has been on my mind for over ten years at this point, sitting and waiting for me to find the time… no, not time, courage, to go out and start it. (Well, maybe a little money too.)

This week is the one year anniversary of starting it all, so first off, Happy Birthday, you big idea, let’s hope we have many more.

For the first year, there were four issues of LampLight, a magazine that I hope people want to read as much as I wanted to make. The trade paper annual of LampLight will be out in July with all four issues.

Also, Dark Bits, an anthology of flash fiction will be coming out soon afterwards as both an ebook and trade paper. It is the first in a series of anthologies entitled QuickLII.

A few more projects are in the pipeline, all of which I am excited about.

All the lessons learned, all the stumbles and panics, are going towards this year. Will there be more? Of course. But that is a part of this whole journey.

Most importantly I found out I had help, friends and support. People who helped me just because I asked and had this crazy idea, and I owe them more than I can repay.

Paula, Katie, Mandy, Ron, Bob, Kelli, Kevin, Gayle and Leah: without you none of this would have happened. Thank you.

Onwards, always. Year two is starting right now, and there are many things to make before I sleep.

Dark Bits will be a collection of 52 horror flash fiction stories. We have no restrictions or subject or taste, only on the length. The anthology will be book and ebook formats. Reprints are welcome.

Maximum of 500 words. We will take multiple submissions; however the plan will be to only accept one story per author.

We are asking for non-exclusive print and digital rights

There are two ways to submit to Dark Bits.

We take submissions through Submittable.com.

Please remember, Submittable is a third party site. Please read the Terms of Service before you sign up.

Submissions can also be emailed with the subject line: DARK BITS, your name, story name as a DOC file attachment to:

Dark Bits will be the first in a series of anthologies, entitled QuickLII

The March issue of LampLight is here. Ronald Malfi joins us as the featured artist for issue 3. We talk to him about his writing styles and how his experiences have inspired his work. In our third installment of Shadows in the Attic, J.F. Gonzalez gives us a history of scary stories, taking us from pre-history through the Victorian age. Kevin Lucia brings us part 3 of his serial novella, And I Watered It With Tears.

For more information and links to where to purchase, go to:

Issue 2 of LampLight has been published. Kelli Owen is our featured artist. In addition to her dark tale, we will talk with her about her craft and advice for new writers. We will hear more about our literary past from J.F. Gonzalez. Kevin Lucia brings us part 2 of his serial novella, And I Watered It, With Tears.

For more information and links to where to purchase, go to: