A look back at what we published in 2018 here at Apokrupha.

glass slipper dreams, shattered the debut collection from doungjai gam is out now! filled with loss, sorrow, revenge and remorse, it is not to be missed. Check out this review on Locus Magazine! apokrupha.com/glass-slipper-dreams-shattered/

The fifth installment in the Folley and Mallory adventures by E. Catherine Tobler came this year, seeing our heroes dealing with a mystery that spans both time and space. Here’s the whole series, grab one today!

We had three episodes of the RadioPlay release in 2018. Inspired by the radio of the past, but built for modern ears, LampLight Radio Plays are audio adaptations of stories from LampLight Magazine. Give a listen! Subscribe today on iTunes, Soundcloud and more!

Only one classic released this past year. In honor of the 200th anniversary, we released an edition of Frankenstein. You can still download it free!

Of course we have more LampLight coming, a new episode of the RadioPlay right around the corner. A few classics lined up as well. The final Folley and Mallory adventure will be here. And of course, some surprises to come!
Category: news
Tags: 2018, anubis, doungjai gam, e catherine tobler, glass slipper, lamplight

Save 40% by pre-ordering the Kindle edition of The Honey Mummy by E. Catherine Tobler!

Agents Eleanor Folley and Virgil Mallory are back! 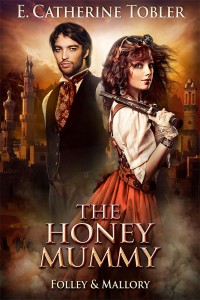 A mummy bound in honey.

An auction of archaic wonders.

An immortal link to the past.

Beneath the streets of Alexandria, Agent Cleo Barclay stumbled into a catacomb that changed her life. Her arms were taken, transfigured, and something remarkable was revealed–something that will stir an ancient life from the ashes of history.

A serpentine sarcophagus holds clues to Cleo’s past and future. She enlists Eleanor Folley and Virgil Mallory to collect the artifact at auction, to unravel its mysteries and her own. When the sarcophagus falls into the hands of an enigmatic Egyptologist, they find themselves participants in his diabolical pursuits.

Drawn to Alexandria by their friend–and the temptations of a newly discovered ring–Folley and Mallory will be challenged as never before.